Home » Timaya vs. Ubi Franklin: Timaya, a Nigerian musician, has had an online feud with Ubi Franklin, a talent management company.

Ubi Franklin, the manager of music artists, and Inetimi Timaya Odon, the CEO of DM Records and a singer known as Timaya, have engaged in a social media argument.

On Wednesday, the two sparked controversy when they spat over a fight scheduled for January 2021.

This comes after Timaya advised Franklin to focus on his profession and his supposed new position as a babysitter for musician Davido’s son, Ifeanyi, only hours before.

He also threatened to assault Franklin, bringing up a similar incident from January 2021, when they were involved in a violent confrontation.

“Do you remember the thrashing I gave you in January of last year?” Please don’t let me defeat you again, and please accept my compliments on your new job. Please don’t mess it up as Ifeanyi’s NANI. Davido is a nice guy who has the ability to improve your life. Please concentrate on your new position. Thanks.”

In reaction to Timaya’s claim, Franklin indicated that he defended himself despite the singer’s claim and that he will defend himself if the issue happens again.

In a series of tweets, Franklin used his Twitter handle to retell the events of the 2021 encounter.

“I know because when you see Timaya acting gangsta, you think he’ll beat me 😂 up.”  😂😂😂😂 No, Wahala, I’m going to look at my oga house’s CCTV tape to see how he knelt to beg. He apologized the next day, saying he was high, and attacked me without provocation, so self-defense kicked in.

“I made sure he got his, but I wasn’t content because there were too many Big Boys/men who knew he assaulted me without provocation because he was drunk, and I did mine to fill in the gaps.” I’m not a violent person, but I’ll fight back.”

Franklin went on to say that Timaya brought the incident to the public’s attention because he had called him out on a recent hit-and-run incident, claiming…

“Timaya is such a spoiled brat. You’re upset because I said it was terrible to knock a woman down and leave her to her fate.” “You came here today to talk trash?” I am not the type of person who will witness something wrong and remain silent. You made a mistake by knocking the woman down and leaving her there. Period.”

See their posts below… 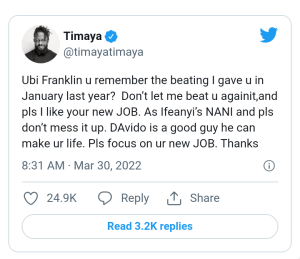 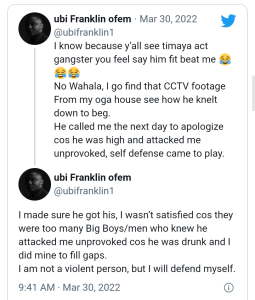 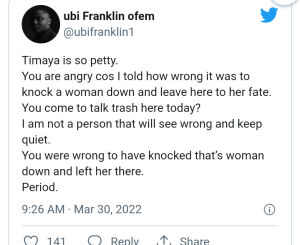